Maybe curse buildings with it.
The Crusade never ends...
Top


letöltés (67).jpg
images (66).jpg
images (67).jpg
Thy gave me a sword to pierce a lie,
Serrated edge for the deamon inside
A moment I'm torn between two tides,
But all I need, I bear inside
Top

i prefer a bit different one: 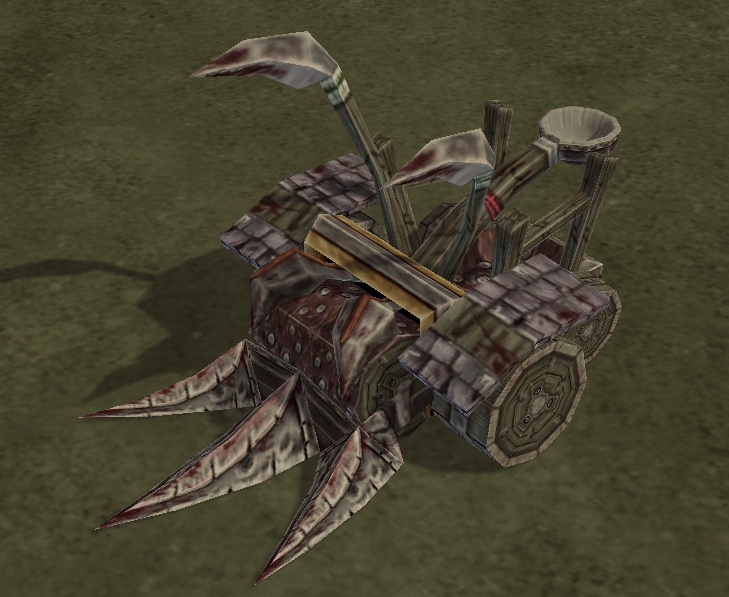 Same range as catapult, throws corpses which poisons enemy units, can store inside up to 4 corpses.
Draft for new unit for newcomers © by Makazuwr32™.
Top

Of corse is from Warcaft

I prefer the more bone-made design.
Vote?
Last edited by Lynx Shafir on Thu Aug 02, 2018 1:49 pm, edited 1 time in total.
Thy gave me a sword to pierce a lie,
Serrated edge for the deamon inside
A moment I'm torn between two tides,
But all I need, I bear inside
Top

Give a spell to necromancers that can be used in sieges, like a black tornado or something like that.
Lordaeron Will rise again!!
Top

A seige that shoots poison? Fitting for undead but thinking outta the box can't they use something else besides poison? Like idk bones that do bonus damage to infantry and maybe some mounted units?
"The smallest pebble was once the biggest stone, the biggest stone was once bigger"
Top

How about launching units over things.
Wise, Might, Loyalty. Forever stands Warfell.
Top

Need to worth to build it.

Still an old fashioned "I shoot stone but i crush you" catapult is the best.

The poison is too simple.
Black tornado?
How it's working to launch sby?

I'll search further ideas.
Thy gave me a sword to pierce a lie,
Serrated edge for the deamon inside
A moment I'm torn between two tides,
But all I need, I bear inside
Top

I personally like my Gargantuan Zombie idea.
Throws his fellow units into enemies for damage and with bonus against buildings (doubled standart ones)
Draft for new unit for newcomers © by Makazuwr32™.
Top

That is someone makes a image.
Wise, Might, Loyalty. Forever stands Warfell.
Top

Screaming skulls whit splash damage.
Thy gave me a sword to pierce a lie,
Serrated edge for the deamon inside
A moment I'm torn between two tides,
But all I need, I bear inside
Top

We could make the necromancer be the undeads way of getting most their siege units since most the spells and abilities suggested to it are siege spells based, e.g. Defile, skeleton ball. Why not allow it to summon a laughing skull that acts as the undeads catapult with stats like:
Laughing skull:

(Not good with bonuses but it's a start.)

That way undead have a more unique way of gaining siege units, they would be faster to get then other races but would be a lot weaker. Might include research of 5 turns for ability though. But it would make more use of the necromancer.

I have the image ready but currently an having problems getting it to respond correctly.
Last edited by Savra on Sun Oct 13, 2019 6:31 am, edited 2 times in total.
Top

Here. It's an edit or @Stratego (dev)'s spitting skull.

I could probably make the skulls flaming skulls instead and leave the poison effect for the corpse launch ability.

It is tedious enough to try to finagle The Spirit Towers whilst that vanishing bug is in effect.

Not to mention... The bone golem and flesh golem are more than enough for vanishing.
Beware the calm before the Tempest. . .
Top

I was thinking undead needed more units with vanishing, plus you could build up the units vanishing whilst their in the spirit towers range, just don't move them, put them in water or some other terrain, or put them right next to it. But if others would want this to be a normal ranged siege unit for undead then I'll replace vanishing with a corpse cost of 3-2 maybe.
Top

Think of the giant hulk thrower as the giant marksmen and for orks and the laughing skull as a goblin cannon fodder. That's how this would work in a way.
Top

Well if alex will like this.
Alas the way it would be "trainable" will be quite surprising.
Draft for new unit for newcomers © by Makazuwr32™.
Top

To be honest I don't really like the image.

I have a few ideas about undead sieges but they will probably be mutually exclusives (e.g. A catapult-like approach and the thrower would overlap a bit so we might consider something in the middle).

Well, they do need more ranged siege options that don't require a sacrifice to use. Unless something changed on the giant zombie.
Top

That giant unit will require for creation of itself some sacrifices, yes but after it works as normal ranged siege like rock thrower.
Draft for new unit for newcomers © by Makazuwr32™.
Top

Oh, I thought you were referring to the zombie via in the zombie rebalance post.
Top
Post Reply
55 posts