This is still new/growing soooooo... I'll probably be updating this post.


Here is my idea about the tournament. When any player wants to join, he gets put onto the list. He also is assigned to a league [if he wishes]. A league equals 2,4,or 8 players/teams. 2,4, or 8 leagues make up a conference. All tournament games are divided into 2 groups: 'season' games and 'non-season' games. Season games are the league, conference, and overall championships using the bracket systems. Non-season games are pre-announced games that are between tournament players. The results of all tournament games (wins or losses of seasonal and non-seasonal games) are taken into account by a "ranking committee". They will rank the players to decide which top players play for the overall championship.

(This first trial will be a bit different)

Being a part of the tournament is a responsibility, because there will be periods that require active gaming (so we can finish on time).

Ok RULES for the tournament games

The higher ranked player of the match (the upper name on the brackets) creates the game. He decides everything that is undefined by the rules (overall rules and league rules).

Visibility: Decided by league, cross league games (see below) will be on Reveal

TC Number: Decided by league (cross-league matches will be Few [meaning non-season games and the King of Strategy Battles])

Game results will be uploaded to the forum as screenshot.

The championships are based on the below bracket examples.

Please let me know how to improve this post and explain better. 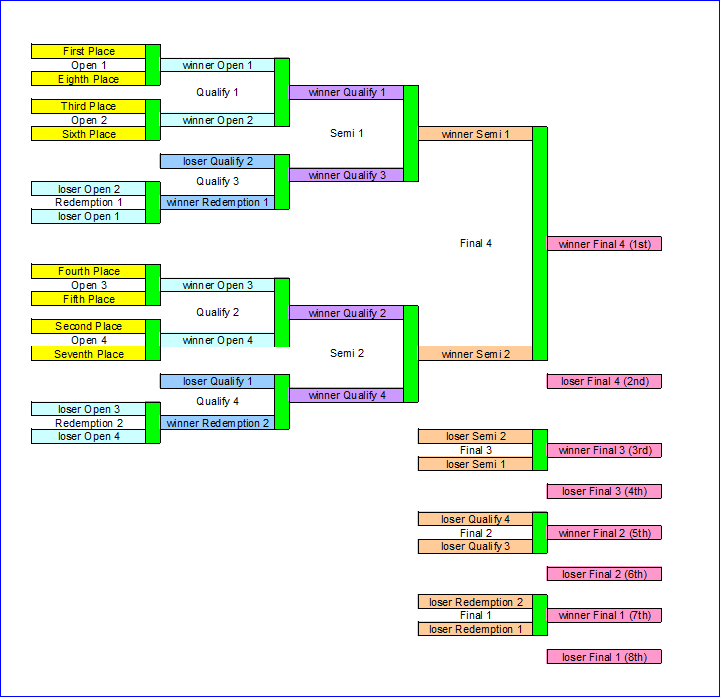 Are you running this as a DE tree?
It's better to keep your mouth shut and let people wonder if you're a fool than to open it and remove all doubt...
Top

Idk what you mean as a DE
Thanks!
Josh
Top

Double elimination...like this:
Round one

It continues like this until the winner of the winner's bracket plays against the winner of the losers bracket in the championship
It's better to keep your mouth shut and let people wonder if you're a fool than to open it and remove all doubt...
Top

Oh I see. Yes in a sense. More of redemption really. A player leaves the race for first after being beaten twice until the final four. The final four is then a classic bracket faceoff. This way helps with final placement.
You can see in the example that Chuck Norris loses only once and gets 2nd but it can be possible to lose once and get 1st.
Thanks!
Josh
Top

Right, that's double elimination (i can't read your handwriting, sorry)...it's possible to lose one game and still be the champion...but this only applies to a straight tournament...aren't the leaguesgoing to play a lot of matches before the regular season ends and the playoffs begin?
It's better to keep your mouth shut and let people wonder if you're a fool than to open it and remove all doubt...
Top

Yes and these will have effect on the overall rankings. When this is bigger the top 8 over all will play for the King of Strategy title. Right now it will just be the two league Champs playing for it.
Thanks!
Josh
Top

This is Hungary and winter is coming.
Top

What happened to players E,I and O...

Do you even alphabet?

Edit: I made a more legible bracket.

I'm ready this is a great idea, good luck..best luck to 51 X)
and remember,wherever your at,there you are
Top

So this is double elimination with a loser's bracket. I really like this idea. How to I sign up for a tourney?
The day is coming when a single carrot, freshly observed, will set off a revolution.
Top

We are currently in the middle of the first tournament. Sorry, but after it is over, you can certainly join for the next one!

It will be fun!
Thanks!
Josh
Top

Oh, ok, awesome, thanks, I am an idiot for posting in the recruitment topic

No I saw that one as well. I cannot wait until you can join.
Thanks!
Josh
Top

Did this stopped now? I enjoyed reading the battles between the experienced strategists...

Only 3 battles left to finish the first tournament so maybe soon it will be completed.
Thanks!
Josh
Top

Anything new since last tournament?

Is maybe a new one planned?

Dunex, this was the only real "official league" tournament like this. Unfourtanately, most of the players quit or dissapeared. and it was never finished.

Earlier this year I ran a tournament that has since finished. Currently, TheBluePhoenix is running a tournament, but it is unfourtanately too late to join I think as we are already half way through.

However, I do have plans to run a double elimination tournament after the current one is over. If you would like to participate in that, keep an eye on the multiplayer section. I will likely announce the tournament when TheBluePhoenix's one ends.
The day is coming when a single carrot, freshly observed, will set off a revolution.
Top