When you design a map that is a random map (not a campaign map) than the following rules are need to be kept in mind.

1. player "swamping" position on game start:
The map generation logic places the playing players when the user starts the rangom or multiplayer game.
These are the locations where the players are randomly put (1..6): 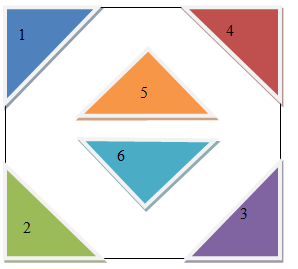 2. initial TC counts in each "corner":
You need to have at least 4 tiles in each section where a TC can be built (where there are no hills or water there)
These places will hold the extra "neutral" TC-s to occupy (the amount of extra TC is determined by the "number of towns" setting few/normal/many)

4. the corner sizes 5 and 6:
this is a bit complicated, so i will not write that down here, but you can guess it from the image above (and it is generally no problem on any maps since in these sections there are usually enough ground tile to put TC on)


II. Manual Player TC SPAWN positions
We have spawn point designator "TCunits".
You can put them in designing a random map and you can tell the engine not to automatically chose poistions for players but put them exactly on these spawners.
they are looking like this in AOF/AOS


III. Manual Neutral TC SPAWN positions
From now TC-s are placeable on random maps, and if you do no automatic neutral TC spawning will occur
(if on map there is at least 1 tc placed, no automatism will fire to place neutral TCs)

Generally you MUST not put anything on the units layer if you build a RANDOM map, you fill only the terrain layer (since everything will be generated by the engine (TC-s, player spawning positions and so on)
The only exceptions are
a) animals and other emerging neutral objects (see in the AOF version (http://ageofstrategy.net/viewtopic.php?f=59&t=553) there you see the design pack updated with the animals - on AOS all are available too)
b) Player TC spawners (see above)
c) Neutral TC-s (for manual neutral tc placement - see above)
Top

Do these rules change with the new tc generation we have? (or if we change it again?)

How do you determine spaces for players 5-6?
Thanks!
Josh
Top

Yeah man look I don't know what I'm doing wrong but I just can't seem to understand cause no matter what I do it doesn't work and it's frustrating.
Normal is an illusion.
Top

Alright my apologies I stayed up all night that evening designing a map and I just couldn't figure it out. I'll post what I have but I'll be back at it soon. Thanks
Normal is an illusion.
Top

Just a question. I've just made a random map and it is now active among my maps when creating a random game. will now that map be available to anyone or just me and the games i create?
Age of Fantasy design leader
Top

How can i make you see my map to make it in the game for everyone?
Age of Fantasy design leader
Top

Once you finish a random map you must send to dev through email, also send a screenshot of the map in the email so he can easily look it over.

Also, speaking of random maps, did you see the canyon map I sent you a while back Daniel?
The day is coming when a single carrot, freshly observed, will set off a revolution.
Top

yes, sorry for not answering but i hate telling someone that is not good to hear

i wrote you that it is nice but please make smaller maps because i dont want make multiplayer games too long and maybe boring also it increases skippers.

Yeah, I made it bigger than what I usually do (35x35) because almost 60-70% of the map was rocks, but I will try to make a smaller version and see how it turns out.

EDIT: I sent you a similar 35x35 map. Again, it is mostly rocks, so its really more like a 20x20 map lol.
The day is coming when a single carrot, freshly observed, will set off a revolution.
Top