Put here any ideas about new suggested game types comes into your mind.

I think this a new idea, but forgive me if I just missed it. What if instead of just random game maps for multiplayer games there were also scenario maps? I'll attach a sample map I made (King of the Mountain) as an example. As you can see there are four players required but their type is unspecified: it could be AI or Human. The map would be set up the same way every time but players could be chosen (multiplayer or hot-seat or CPU). Of course on this map the player who could control the center would have a huge advantage.
Thanks!
Josh
Top

Oh and here is the picture of the map. I thought I had attached a file, but I'm still new at this so please forgive me. 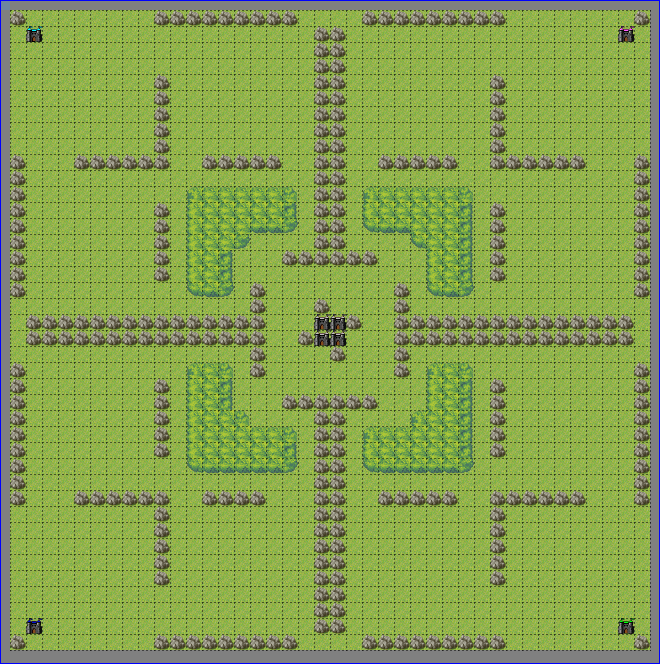 Here is another sample map: détente. Three players are required. Please tell me what ya'll think of these ideas.

good idea!
You should try to be simmetric in détente, because the lower guy is at disadvantage against the green.
This is Hungary and winter is coming.
Top

Huh. Yes, probably since maps are quadrilaterals, I should keep numbers of players to an even number.
Thanks!
Josh
Top

Don't know what coding is necessary to implement this idea though.
Thanks!
Josh
Top

for this we will need:
- option to choose from these maps too, maybe in a different section - i dot know yet
- after selecting the map the app should
-> detect how many players are on the map.
-> restrict the player selection part to this fixed player count
-> should let the user select that "which" player he wants to be with (or not?)
- after game launch
-> no TC generation should occur, instead using the default setup
-> the player assignments should be as was ordered at launch.

i think these are needed (i wrote here for myself to know what to do)
tell me if i missed something.
Top

Just kidding! I have no idea, but it sounds AWESOME!!!

Here is my most intricate (and cray) sample map yet: Hydra. Tell me what you think! (And it's even symmetrical!)

The name can be changed. I am not quite sold on it yet. I thought it was a cool name (cut off one head, two more shall take its place). If you can think of a cooler name let me know!
Thanks!
Josh
Top

I definitely want to try it, but is it not too big? I think it will take 50-100 turns or something to win such a map
Top

Well, It might be too long for multiplayer, because that games should be smaller (I think)
This is Hungary and winter is coming.
Top

Ok, here is a smaller variant map: Octopus. Does anyone else think a 60x60 map is too big for a multiplayer game. I guess I probably agree (I have only played one online game).
Thanks!
Josh
Top

Here is a new variant of the variant (see above) of the original sample map: Cray Button! There is one trigger (I assume triggers can be activated on this style of game): once the small rocks in the middle are destroyed the walls are all deleted. Please post your comments and suggestions!
Thanks!
Josh
Top

If I would be the first player who reach the TC's, I wouldn't destory those rocks:
Because without rocks the enemy will be quicker at the TC's.
If you won't destroy the rocks, you can built more troops before the enemey arrives, and outnumber them whenever you want.

So if you would make such a trigger, I think the rocks should be placed so you have to destroy the rocks, before you can enter a TC.

But that's just my opinion

That may be a concern, I as I thought originally, but the scenario you have put forward might happen if the opponents were all AI. But if there are four experienced HUMAN players, then there is a good chance that most will arrive there at the same time and no one will gain exactly a distinct advantage. After one player gains the center then the other players will attempt to trip the trigger, if it has not already been tripped in the initial fighting. But if many disagree with me, then it is very simple for me to move the rocks to block the paths.

More of a concern for me is the fact that players 1 and 3 would be able to build a castle while players 2 and 4 would not. So I have a suggestion: on maps that are not symmetrical or where one player has an advantage, we would put, in the map info, rankings. That way players looking for a challenge could choose a harder setup. Or with a stat system we could rank the player openings, so that the highest ranked player in the game would take the hardest slot.

On this map, I could even it up by placing a single mountain in each starting area, and no one can build a castle right off the bat.

Everybody please continue to comment and post your sample map ideas. And look later today for a new map idea I am working on and I will hopefully post later today.

Ok, I have another map idea and here is the sample. Tell me what you think. I will probably edit 'Cray Button' as heeyy suggested.
Thanks!
Josh
Top

This map's not symmetrical.

:The Battle of Hyde Park. If anyone lives across the pond in England, let me know if this map is terribly accurate.

Daniel: I asked this a second ago on a different topic.

What is the status on the development of this idea. Is it on the list for the near future?
Thanks!
Josh
Top

This game has great multiplayer, but this has a flaw - in each game you must wait a long time before you are strong enough and get action. Unlike real-life, where countries start off strong and with an empire. I, personally, enjoy the second half of the game- you know, fighting for territories etc - more.

My solution:
Allow multiplayer scenarios to be added into the game. I have a group of maps designed specifically for this, but unfortunately can't be implemented
Top

As many of you know, I have been playing this game for a very long time, and I have found that the biggest problem with the game at the moment is the fact that one cannot have a quick match online easily.
Most games take weeks or months to finish, many being abandoned or rage-quit. This is because the starting phase of the game takes up a lot of time with little progress especially with a lot of players, and means the FUN BATTLING part is delayed.

As a result, I only participate in few multiplayer games, preferring single player, or forum-organised matches.

My solution: Allow multiplayer maps that are pre-built-up. Meaning all of the work into expanding your empire has already been done, and you are ready to fight!
Pros:
+ Get straight to the action
+ Therefore less people get bored
+ Potentially shorter games that could be finished in a few days (with an active player/friend possibly just a day)
+ You can use this for future tournaments (faster fights)
+ Use the map editor to create maps for multiplayer too!
+ Possible multiplayer campaigns
+ You could also make a super-short game feature where it pairs you up with an online player, you fight with just a few units each on a small 7x10 map, and every turn must be completed in 5-60 mins (instead of 24h) allowing games to be as short as an hour!!!
Cons:
- A bit of code but certainly worth it IMO. It shouldn't be too hard given that you're just changing who controls a team, right?
- There could be a team starting with a slight advantage on some maps...

I would appreciate feedback!

I don't know if it will stop people quitting. But as a whole, I think your idea is really great!
This could make multiplayer games ALOT more enjoyable. Plus Iit would definitely increase the popularity of online games.
Hopefully the coding will not be to complicated.

We should build specific maps but it might be wort it.
Age of Fantasy design leader
Top

If this is added...ww2 anybody?

Exactly - you could create a ww2 with your friends! I am surprised it hasn't already been implemented...
It would also pair nicely with the map editor.
Daniel please read!

+1 this is a great idea. In my opinion, I think this takes priority for being implemented over most other ideas on the forum.

IMO only the map market has precedence over this idea.

Daniel we are ganging up on you.

I would love to have coolguy fight by my side. Quite bored of losing from him now...

BEWARE!!!!The long lost empire of phoenicia is rising- The world is but just near the golden age,wherein men played and frolicked,without any worries at all